Transservice Co., LTD has been operating in the Far East transport services market since 1991 and has been carrying out freight forwarding activities in all types of transport and freight operations with the fleet during the transport of export-import and coastal cargoes. The company has a subsidiary in the port of Nakhodka, the port Vostochny branch and has agency relations with firms located in almost all major Russian ports, as well as in Japan, China, Korea, the USA and Europe.

The company has accumulated experience in the implementation of cargo agent services for containers processed through the ports of Vostochny and Vladivostok. For example, in 1992–1994, we performed the functions of a freight agent and an exclusive freight forwarder to study logistic schemes and deliver (with customs clearance) to the doors of recipients of significant volumes of containers with humanitarian aid from Japan in more than 12 cities in Siberia, the Far East Chukotka. Up until 1996, Transservice Co.,LTD acted as a freight agent and freight forwarder on the DVRS VRS LINE container line between the ports of Vladivostok, Ho Chi Minh, Singapore, Jakarta, Kelang and Bangkok. In 1999-2000, the company, together with its Chinese partners, was directly involved in the resumption of the regular container line and the organization of its work between the ports of Shanghai and Vostochny. Until 2003, she served as the general agent of the TRANSMARINE CONTAINER LINE line in the port of Vostochny.

From 2012 to 2015, Transservice Co.,LTD acted as the general agent of Hyundai Merchant Marine Co., Ltd. in the port of Vostochny.

Currently, it is possible to return empty containers after import shipments in Irkutsk, Krasnoyarsk, Novosibirsk, Yekaterinburg, Moscow and 20 other regions of Russia.

In these cities there is the possibility of providing empty containers for domestic or international transport.

From 1992 to 1996 The company, one of the first on the Far East, transported timber, cotton, machinery and other cargoes by leased dry cargo ships between the ports of Southeast Asia and up to Indonesia. In 1993 alone, over 60,000 tons of raw cotton were transported from Nakhodka / Vladivostok to Korea, Japan, Thailand and other countries.

Since 1995, we have been actively engaged in brokerage and freight operations in maritime transport. Significant amounts of coal were transported to Kamchatka and forests to Japan and Korea. For a long time we carried out freight operations with FESCO bulk ships in the Mediterranean / Black Sea, Baltic, North Africa and United States.

Transservice Co., LTD was a forwarder of CATERPILLAR company in the port of Vladivostok, carried out forwarding and agency functions of large Japanese and Korean transport companies.

One of the main activities of the company is the organization of delivery of large-sized equipment, heavy equipment and “project cargoes” by various types of transport to Russia and the CIS countries.

In 2002, Transservice Co., LTD was included by Sakhalin Energy (Shell, Gasprom, Mitsui, Mitsubishi), the operator of the “Sakhalin-2 project” among the contractors for the development of the Sakhalin Island shelf.

Since the beginig of the company's work, the main focus of its activities has been and remains the transport container forwarding and agency services to carriers.

the head of the company 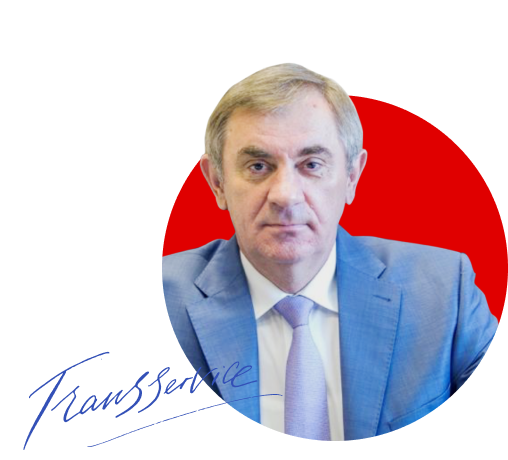